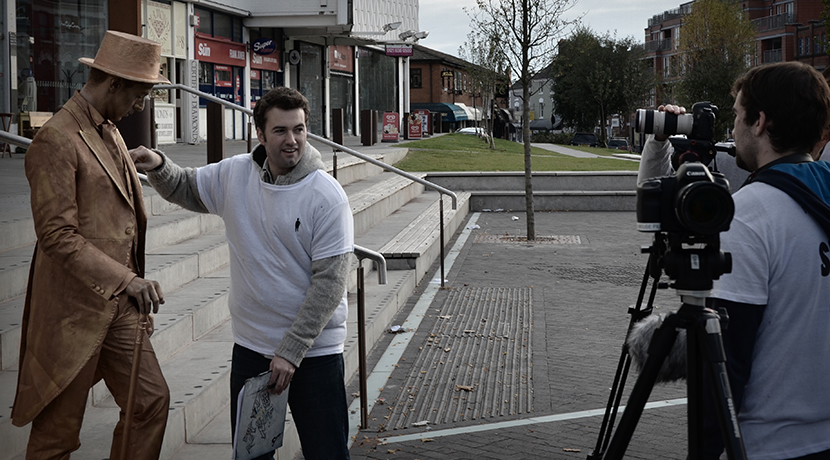 Independent film production company Dark Matter Films, based in Bewdley, has had a stunning viral YouTube success this week. Their 7-minute zombie comedy short film ‘Still’ has racked up over 120,000 views in the space of a single week. The film, written and directed by debut Midlands filmmaker Carl Timms, has been praised for its unique concept. Commenters are calling it a “masterpiece”, and the “most original idea I’ve seen for a zombie apocalypse movie”.

‘Still’ was filmed in Birmingham’s busy Jewellery Quarter and stars local actors Joe Capella, Rob Hall and James Rowell. It was funded entirely by crowdfunding and shot in just 2 days. Dark Matter Films pulled off a coup by enlisting Stourbridge-based special effects expert Stuart Conran, lead FX designer on cult zombie hit Shaun of the Dead, to create the effects. Featuring over 100 Midlands extras and crew the short film has already had a successful festival run screening at 25 festivals all over the world and winning 9 awards. It was also selected to be part of a horror anthology called Blood Clots on Amazon Prime. Life-long zombie fan Carl says of his success: “I knew the moment I had the idea for Still that this was an original approach to the mostly tired zombie genre. However I never expected it would take off like this, it’s been a lovely shock to see positive comments from all around the world”

This YouTube viral success follows news that Dark Matter Films’ follow up short Off Grid will have its London premiere on Friday 13th December as part of the five day Lift-Off London Film Festival. Off Grid screens on Friday 13 th at 8.30 PM. Off Grid is a dark short supernatural thriller starring A-list leads James Cosmo, CBE (His Dark Materials) and Alison Steadman, MBE (Gavin and Stacey). Cosmo and Steadman are joined in Off Grid by Marc Baylis (Coronation Street), Kate Davis-Speak (The Barge People) and local Birmingham actor Francis Quigley. The film recently had its premiere at the Birmingham Film Festival s Off Grid is the second short film Carl Timms and his first with writing partner Mark Brendan, who also co-produced the film.