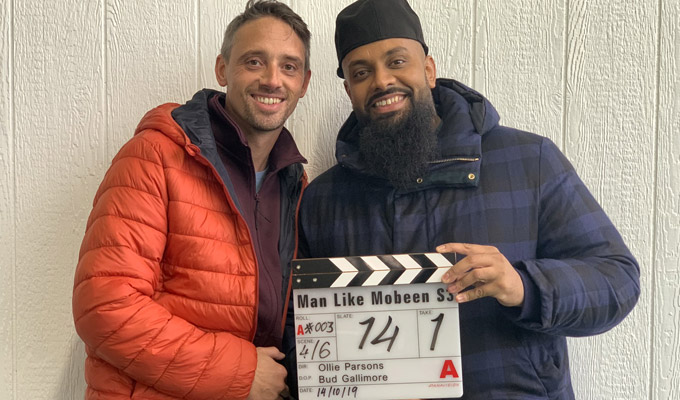 Production has started on the third series of award-winning BBC Three comedy, Man Like Mobeen.

Man Like Mobeen is produced by Tiger Aspect, part of Endemol Shine UK, for BBC Three. The third series is due to air early next year. The series has scooped numerous awards and widespread critical acclaim. 63% of its audience is aged under 35 – well above the average for BBC Three.

After the cliffhanger at the end of series two, the show will return to Small Heath. Here, Mobeen has been sucked back into the dark underworld of his criminal past. Has he gone beyond the point of no return? And what will the consequences be?

Ahead of filming commencing, Guz Khan launched a training scheme in partnership with Film Birmingham, BBC Comedy and Tiger Aspect, offering eight entry-level positions for individuals from all backgrounds in and around Birmingham to get first-hand experience of the TV industry by working behind the scenes on the show’s production. The eight candidates will work in departments such as directing, producing, costume, make-up and camera work. They are also being paid £550 a week. Four of the placements are funded by BBC Comedy, with two places funded by Film Birmingham and two funded by Tiger Aspect.

Guz Khan says: “Accessing the entertainment industry is one of the trickiest things I have ever seen. And it’s for this reason it was imperative for us to allow working-class people the opportunity to do so. I want to see more of our people in front of and behind the camera. The best way to do this is to facilitate these opportunities when we can. I am genuinely excited to see regular folks grow into something special.”

Shane Allen, Controller of Comedy Commissioning at the BBC says of the scheme: “This initiative is a pro-active way to honour Guz’s commitment to including and representing the community he comes from. Tiger Aspect and the BBC are committed to tackling the socio-economic challenges that underpin TV’s need to open the doors to people of all sorts of backgrounds and enrich the off-screen talent pool.”

Sindy Campbell, Head of Film Birmingham says: “Authentic representation on – and off – screen is extremely important to us and we’re proud to support Man Like Mobeen which showcases and inspires communities like Small Heath. Birmingham has one of the UK’s most diverse populations; we want to ensure our creative workforce reflects this. We are pleased to champion this initiative which provides the opportunity for those of all backgrounds to break into Birmingham’s screen industries.”

Damian Kavanagh is Managing Director for Tiger Aspect. He says: “Man Like Mobeen skilfully blends laugh out loud comedy with the important issues affecting Small Heath. The show has always had something to say. So I’m delighted it can now leave a huge legacy through this trainee scheme by providing the opportunity for a brand new generation of talent to get their first step on the ladder in TV production.”

Man Like Mobeen is a Tiger Aspect production written and created by Guz Khan and Andy Milligan. The producer is Gill Isles, the director is Ollie Parsons, and the executive producer is David Simpson. The Commissioning Editor for the BBC is Kate Daughton.